Abina and The Important Men

"Abina and The Important Men" tells the true story of a very brave young woman from late 1800’s Africa who took a mighty risk in order to seek justice, in animated form.

As Abina came to life in our prevailing age, there were important choices to be made regarding truth, justice, authenticity and reality. The film is an adaptation of the graphic novel by the same name and is based on actual court transcripts from the late 1800’s of Abina’s trial to hold her master accountable for enslaving her under colonial British rule which outlawed slavery of any kind. There are complications in the story-the British are soft, overly confident in their dominance over western Africa, and the characters are steeped in traditions and politics that are far removed from our contemporary cultural understanding. It turns out that the brilliance of telling this history via graphic novel translated well into the creation of the animated motion picture. Sometimes being authentic and telling the truth are best done via representation, so that the form speaks to the inadequacy of historical documentation as much as the story itself. 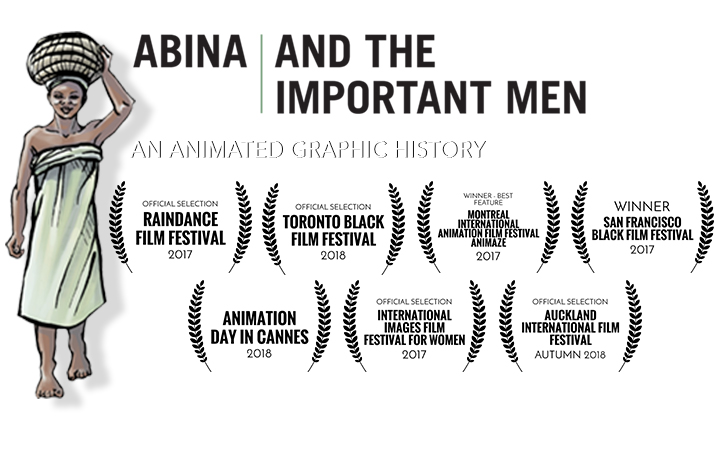 Trevor Getz and Liz Clark’s graphic novel about a young woman who fights for her freedom in the courts of Africa’s gold coast in the late 1800’s comes to life in an animated feature produced by the Documentary Film Institute at San Francisco State University. The novel won the James Harvey Robinson prize in 2014.

For these reasons, I also chose to cast the characters from the community surrounding me. The lead role of Abina is played by Toni Harry, a sophomore college student,  who had a drive and fire that felt akin to Abina herself. The rest of the cast comes from the faculty, staff and students at San Francisco State University who all had a stake in this story being told. Each person who voiced a role had a chance to walk in the shoes of those who came before and intersect that experience with the life they now live. The voices are urban, modern and open a space for critique and discussion about Abina’s personal biography, slavery, the enlightenment and colonialism. Many of our recording sessions involved questions of critique in the story and we often spent time speculating about the character’s intentions, limitations and true feelings. The characters’ are all thoughtfully played and invite the audience to see a variety of perspectives and shades of the true story.

Finding innovative ways to express truths about the human experience, its complications and nuances are necessary to unlock aspects of histories that have been traditionally left out of the master narrative. Animation, graphic novels, foggy lines between fiction and nonfiction are important areas of investigation by practitioners and researchers alike. In this case, it creates a truth of its own making that includes the reality of the transcripts, the rendering of the people and the exploration of motion and soundscapes to locate what it may have felt like to take a tiny step toward justice when all odds, including those of history, are against you. Abina was driven by the imagination of a future that did not yet exist, the film tries to embrace that imagination and expose her efforts toward a more just world.