A Forum for Documentary Disruption...It is urgent, in these times, to secure spaces where democratic conversations can occur.

Documentary film is one of the most powerful tools we have to research and reflect on our collective human experience and create connections to better ourselves. There is currently no single hub for global conversations around documentary film and how it illuminates and intervenes in the social issues defining our age.

San Francisco State University’s Documentary Film Institute plans to meet this need by creating Pluralities, a multi-media, digital journal. Pluralities will use nonfiction film to engage the humanities in nuanced dialogue. It will bring together a cosmopolitan group of thought leaders, creative thinkers and learning communities to participate in the same global exchange as documentary filmmakers. Pluralities will also offer far-reaching avenues for national and international nonfiction filmmakers and scholars to exhibit, examine and exchange their work in one platform. In addition, it will provide an umbrella for the various creative and scholarly pursuits that are housed at the Documentary Film Institute.

The journal will function as an online and interactive space that identifies, experiments and innovates new forms of multi-media scholarship in the field using a no-fee open source platform. In addition, it will bring together thought leaders and creative professionals in bi-annual symposia and conference settings to further interrogate these new approaches to scholarship and intersectionality in the burgeoning areas of nonfiction film and the humanities. Pluralities’ vision is to be part academic journal, part aggregator of underserved global voices and part provocateur to the field of nonfiction film and the visualization of the humanities. The journal will feature the work of graduate students as well as columns that debate issues of representation and history in film in language accessible to a non-specialist public. The aim is to collect multiple versions of reality in one space in order to question the possibility of any master narrative, filling in the holes of history and the present with experiential knowledge and self-critique.

The Bay Area is the birthplace of nonfiction film and, as a center of cultural, political and technological innovation, the region remains a hotbed for documentary filmmaking. As a university dedicated to global justice, equity and accessibility, and rooted in cross-cultural studies, SF State is the most compelling place to ground an innovative multi-media, digital journal for nonfiction film. The university’s values and the extraordinary diversity of our students, faculty and staff empower us to give agency to underrepresented communities all over the globe. 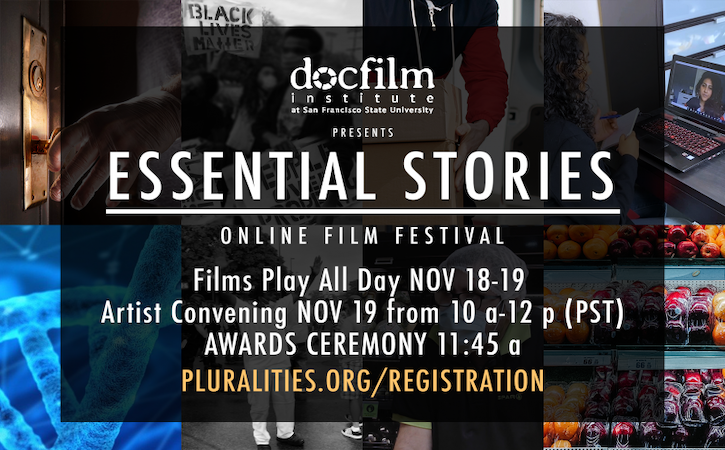 The DocFilm Institute at San Francisco State University invites you to our “Essential Stories” Film Festival happening on November 18 and 19. As part of our annual Pluralities conference in 2020, we will explore the “essential perspectives” from a line-up of filmmakers documenting their experiences of this new, 2020 reality — one that is influenced by COVID-19 as well as various social justice movements. Essential perspectives are those that are unique to one's position and circumstance in society and the current environment.

We encourage you to join us for a live, virtual discussion happening on Thursday, November 19 from 10 a.m.- noon as we’ll have a Q&A session with our finalists as we announce various awards. Throughout the entire duration of our program, all finalist films will be available for on-demand viewing. Attendance is FREE. 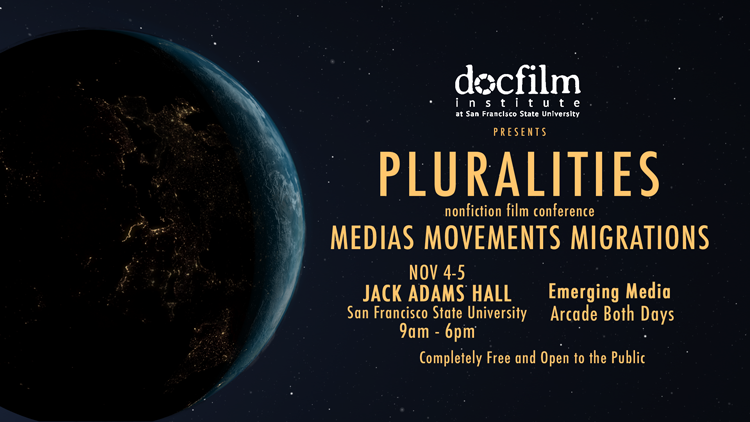 Join us November 4 and 5 at San Francisco State University for an exciting line-up of filmmakers, researchers, VR, and discussion about all things nonfiction. We welcome keynote speakers Hamid Naficy (Northwestern University, Evanston Illinois) Alex Rivera and Viridiana Martinez (The Infiltrators).

Hamid Naficy is a leading authority in cultural studies of diaspora, exile, and postcolonial cinemas and media, and of Iranian and Middle Eastern cinemas and media. His areas of research and teaching include these topics as well as documentary and ethnographic cinemas. He has published nearly a dozen books (some award-winning) and scores of book chapters and journal articles. In addition, he has lectured widely, nationally and internationally, and his works have been cited and reprinted extensively and translated into many languages. Naficy has also produced many educational films and experimental videos and participated in major international film festivals, curated film series, and initiated the annual Iranian film festivals in Los Angeles in 1990 and in Houston in 1992.

Alex Rivera and Viridiana will also be present during a special screening of their film The Infiltrators. Without warning, Claudio Rojas is detained by ICE officials outside his Florida home. He is transferred to the Broward Transitional Center, a detention facility used as a holding space for imminent deportations. Terrified of never seeing him again, Claudio’s family contacts the National Immigrant Youth Alliance (NIYA), a group of activist Dreamers known for stopping deportations. Believing that no one is free as long as one is in detention, NIYA enlists Marco Saavedra to self-deport with the hopes of gaining access to the detention center and impeding Claudio’s expulsion. Once inside, Marco discovers a complex for-profit institution housing hundreds of multinational immigrants, all imprisoned without trial.

Check out the full schedule on Eventbrite. 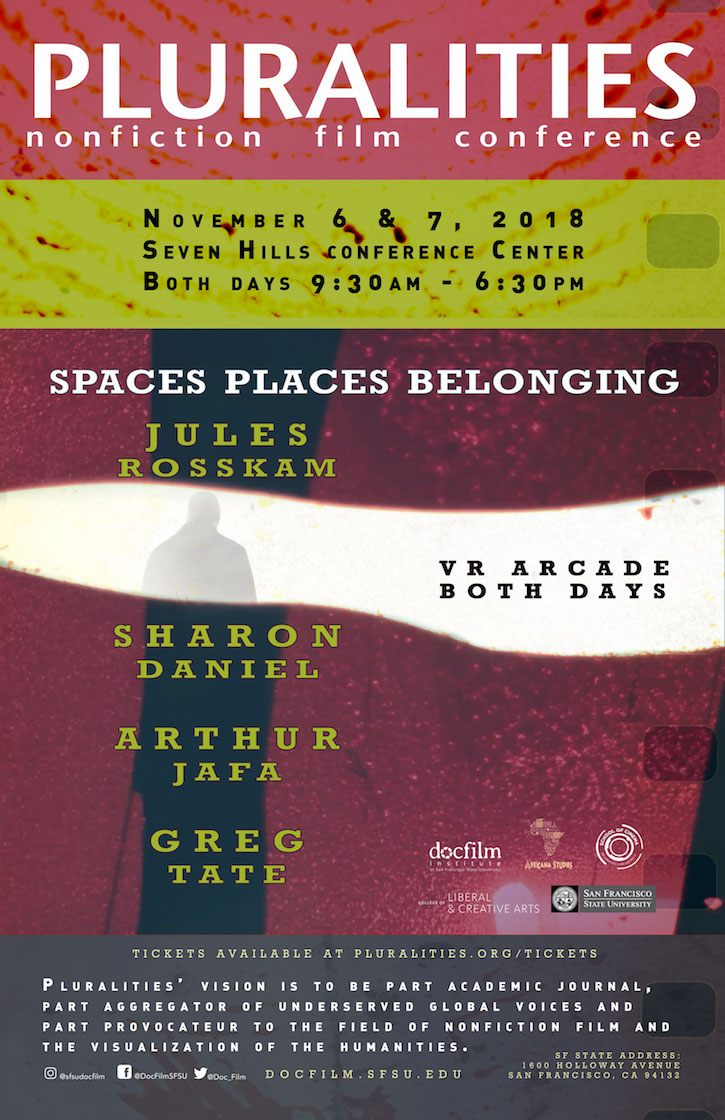 On November 6 and 7 at San Francisco State University we hosted an exciting line-up of filmmakers, researchers, VR, and discussion about all things nonfiction. We welcomed keynote speakers Jules Rosskam (University of Maryland, Baltimore County) and Sharon Daniel (University of California, Santa Cruz).

Jules Rosskam presented the day one keynote, Borders, Boundaries, and Bodies, or How I Got To Be Here: Jules Rosskam, screened his newest film, "Paternal Rites" and gave workshops during the conference, while interactive and participatory media artist Sharon Daniel presented the day two keynote, The Evolution of "Public Secrets." We were excited to also host artist, video maker and cinematographer Arthur Jafa in conversation with musician, producer and artist Greg Tate.

To close out the conference we screened the documentary, "Survivors". Members from the "Survivors" team were present for a Q&A following the film. "Through the eyes of Sierra Leonean filmmakers, "Survivors" presents a heart-connected portrait of their country during the Ebola outbreak, exposing the complexity of the epidemic and the socio-political turmoil that lies in its wake."

VR Arcade: Both days, all day

VR Arcade: Both days, all day

2:30-4 p.m., Beyond Inclusivity, New Trends in Documentary Funding and Representation

Our 2017 conference brought together thought leaders and creative professionals in symposia and conference settings to further interrogate these new approaches to scholarship and intersectionality in the burgeoning areas of nonfiction film and the humanities. Pluralities’ vision is to be part academic journal, part aggregator of underserved global voices and part provocateur to the field of nonfiction film and the visualization of the humanities. 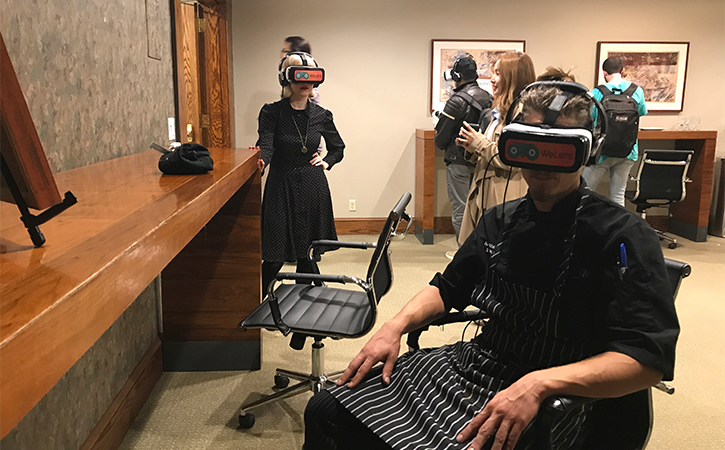 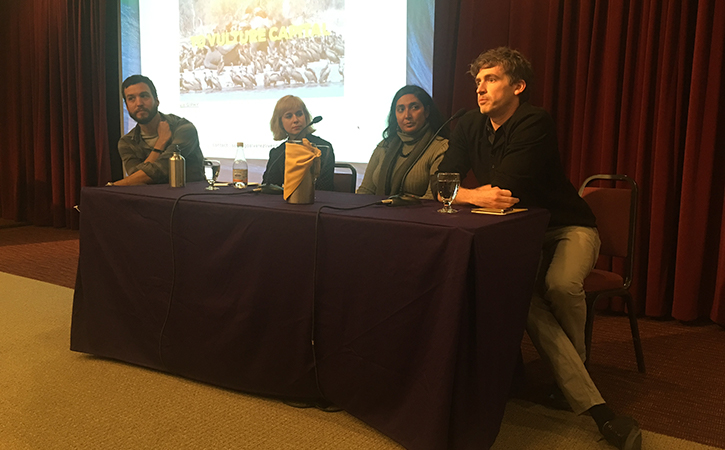 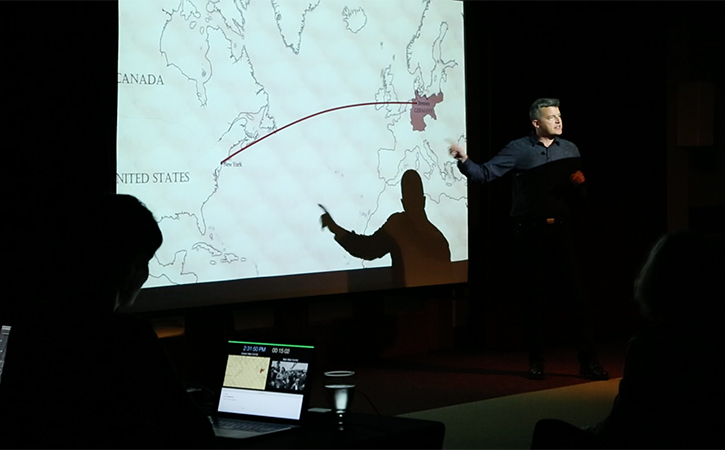 As we navigate our greater worlds, those around us and those inside us, the need for collective reorganization and recreation of those spaces becomes clear. This volume explores efforts to do just that. From without and within, these essays examine ways people are navigating “spaceship earth” as more than an individual, as part of a larger hope to gain understanding of an unknown future. Some failed, some succeed and some continue to try. The journal has taken a broad view to understanding how stories are told in the world and included traditional academic essays, projects that expand on the idea of the relationship between medias and spaces, text paired with collected videos from the larger online open narrative and an extensive case study on the rise and fall of a seminal SF Bay Area arts organization. Contributors include: Jules Rosskam, Sharon Daniel, Laura Chipley, Samara Smith, Rachel Stevens, Alina Predescu, Jennifer Arin, Sirin Erensoy and Mark Freeman.

There are no passengers on spaceship earth. We are all crew.

We were able to gather the voices of many nonfiction scholars, makers and distributors at our first conference in the Fall of 2017. At this conference we had countless engaging and collaborative guest speakers that showed their own content and wrestled with the expanding spaces of documentary media.

Contributors to Volume One Include: