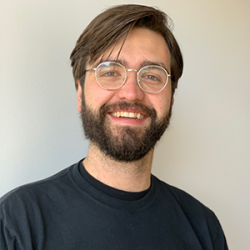 Wyatt Irmen is an independent filmmaker with works dealing with environmental issues, issues of memory, and the sensational aspects of cinema. After spending three years in LA, with a background in production  Wyatt moved to San Francisco to finish his film degree.  While at the university he found a passion for non-fiction filmmaking and became interested in experiential films. Wyatt continues to create fiction and non-fiction films in the SF Bay Area with multiple independent filmmaking groups. He is experimenting with Virtual Reality and Augmented Reality in hopes that he may find a new way to communicate experience in a way that traditional cinema hasn't.